Home » Blog » Why Do Volleyball Teams And Benches Switch Sides?

Why Do Volleyball Teams And Benches Switch Sides? 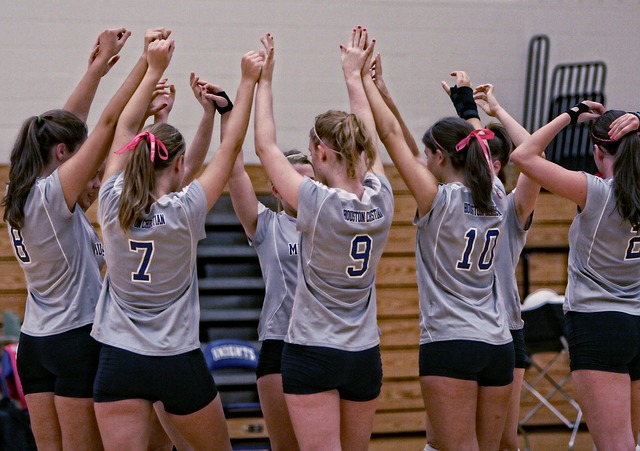 Even as someone who has been playing volleyball since the age of 13, I never really took the time ask:

Why do volleyball teams, including their benches, switch sides of the court? While volleyball courts must be the same size on both sides, home gyms will offer minor differences in the surrounding environment. Lighting, windows and space behind the baseline (for example) can affect a player’s game performance, and so teams are required to change sides after each set.

If you’re new to volleyball, you might be thinking: Really? Differences in lighting are enough of a factor to change sides?

In some cases, it really can be. And like many rules, the regulation needs to account for the worst possible scenarios.

This post will look at a few reasons why this interesting rule and ritual has been introduced into volleyball, along with whether or not we think it makes sense.

Just to clarify
In indoor volleyball, at the end of each set (a game played to 25 points), both teams and benches will switch sides of the court.

At the international level, there is actually a strict protocol for this.

*Ever wondered why the referee asks volleyball players to wait at the end of the court before switching sides? They don’t do it just for fun. Volleyball regulations require both teams to exit the court through the baseline before changing sides for the next set.

In fact, since we like to be volley-nerds here at VolleyPedia, we looked up the official FIVB ruling:
“18.2.1 After each set, the teams change courts, with the exception of the deciding set.”
FIVB-Volleyball Rules 2017-2020

While players on the court are asked to exit the court through the baseline and walk around the court in an anti-clockwise rotation, bench players are allowed to move directly between benches.

Why do volleyball teams change sides of the court after each set?

While major arenas and stadiums are pretty much regulation on both sides of the court–this is actually quite rare at most levels of volleyball.

For indoor volleyball, there are actually a number of factors you’re like to face that can determine one side being thought of as ‘better’ than the other.

Now, let’s be honest from the very beginning:

Absolutely none of these factors are reasons that you would lose a match on their own.

But since we’re exploring the reasons for changing sides, I’m going to dive in.

Before I do though, you might still be wondering why volleyball benches change sides.

Why do volleyball benches switch sides?

Unlike basketball and other sports, in volleyball the benches will change sides with the starting players.

This is actually quite simple.

In basketball or soccer, for example, both teams may be moving toward one goal, but they occupy the entire field.
When they are in one half of the field, they are in offense; on the other half, they’re in defense.

In volleyball, however, the court is physically divided into two halves.

Based purely on the structure of the court, this would be a good enough reason to switch benches. But there are also some other technical cues to mention.

In beach volleyball, this is more obvious, but in indoor volleyball it’s also a factor.

While standing at the net, players will signal which way they want to block for the rally. They might decide to block an opponent’s line, and they’ll signal this to the defense with a finger behind their back.

If both teams switched sides without their benches, players on the receiving side could just look to the bench to see which way the opponent is blocking!

For these reasons, as well the fact that team timeouts are held on your team’s half of the court for that given set, the bench will always move with the starting players in volleyball.

Now, let’s find out some reasons why changing sides can actually be important for players.

For me personally, this was always a genuine factor. Mental or not, if I didn’t like the lighting of a gym, it could really affect my game performance.

There are two main aspects of the game that affected me as an outside:

To be honest, reception was far less of a problem due to the lighting–although there were some gyms in my junior days which were quite dark. If you practice in a dark gym, then suddenly play a match under bright lights, the ball can look like it’s the size of a watermelon.

Serving, on the other hand, was a pretty consistent hassle when it comes to lighting.

It pains me to say so, but most gyms simply weren’t designed with volleyball in mind. Especially when you are playing in middle school, high school or college leagues that were mostly built for basketball.

For that reason, the brightest lights have a habit of lining up directly above the baseline or just before it.

If you happen to jump serve, this is the nightmare situation. You toss the ball up high, ready to swing hard into the court, and BAM!–suddenly you’ve lost it in the bright white lighting.

Those were my two biggest problems, but there’s another position that can be really thrown off by poor lighting:

When setters arrive at a new gym, one of the first things they’ll do is set a bucket of balls and test the lighting.

If they’re constantly blinded by bright lights above them with each perfect reception, that could be something to throw their consistency.

And since these courts were not built with volleyball in mind, it really can be a matter of one side having a disadvantage while the other side is perfectly fine.

Particularly when volleyball was just starting out and this rule was first implemented, switching side of the net was an important way of balancing the play field–in case there were any strange or unseen advantages in the home court.

Service space
When you reach higher levels of volleyball, there are certain regulations that need to be met–the space behind the baseline is one of these.

“1.1 DIMENSIONS The playing court is a rectangle measuring 18 x 9 m, surrounded by a free zone which is a minimum of 3 m wide on all sides.”FIVB-Volleyball Rules 2017-202

In junior leagues and more recreational volleyball, it’s not uncommon for this serving space to be restricted.

Again, more often than not this will affect one side of the court more than the other–switching sides can be the difference between playing your jump serve, or settling for a standing float.

Obstacles above the court
Again, this will apply mostly to recreational and junior leagues where the FIVB standards aren’t exactly enforced.

The standard, if you’re interested, is an extension of the free zone mentioned above. And this extends 7 meters (roughly 23ft) above the court without obstruction.

When you’re playing on a court that was made for basketball, what’s the most common obstruction hanging above the court?

Basketball hoops, low-hanging lights and just generally low ceilings can all be factors that influence how high your team can play the ball.

When it comes to defense, or setting up your attack, this can be a major factor.

Gym windows
If ever there was something that sounded like complaining (but isn’t) it would be this.

The placement of windows in the gym can, on rare occasions, be a cause for an unfair advantage on one side of the court.

Imagine you’re scheduled to play every Saturday afternoon at 5pm. Since this is a winter sport, for a couple of months this can line up pretty close to when the sun is hanging low in the sky.

When the windows of a gym are placed in such a way that the sun can shine directly through and onto the court, this can be a real disadvantage.

Like driving directly toward the setting sun on the freeway, you stand in reception with your hand up shielding your eyes. Naturally, this is a rare occurrence, but I’ve seen it happen enough times to mention.

Court Backings
This is mostly a factors for passers and setters.

For passers (receivers), this refers to the wall behind where the server is standing.

For example, when the wall is a similar color to the ball or court, it can be difficult to pick up the ball quickly and make the right move in reception.

Similarly for setters, when the side walls are either further or closer than normal, gaining depth position can be a real challenge.

But to be honest, there’s one more big reason which (I think) is probably the most important factor for teams switching sides in volleyball:

You’ll hear me throw in a few psychological points from time to time, so bare with me if it isn’t quite your cup of tea.

Leave a comment below, on the other hand, if you find these points interesting and would like me to include more in the future!

I won’t go into it too deeply here, but I’m not the first to point out the presence of rituals in sport.

From the hooligan fans of English Premier League soccer to the coin toss before every volleyball match:

Ritual simply is a part of sport.

It helps give players, coaches and fans alike a feeling of structure.

And it helps to give the game a sense of timelessness–like we’re playing the same game that our parents and players before us were a part of.

Changing sides in a certain fashion is a part of this tradition, and even in stadiums where there is no ‘reason’ to change sides, the strength of this ritual is reason enough to do so.

So there you have it. Volleyball teams change sides at the end of each set for a number of valid reasons, and some not-so-valid reasons.

If you found this post interesting, informing, or just plain boring:

Leave a comment below telling me what you think. I’m always looking for ways to improve this space, and your feedback is invaluable!